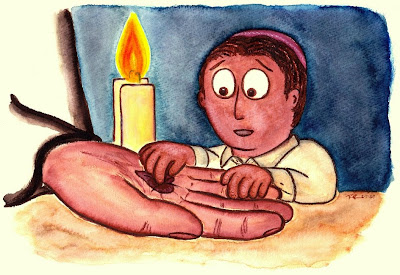 Once when I was holding my infant son and singing him to sleep, I wanted to worship God and wanted to sing the traditional Jewish "Shabbat shalom" song, but I just couldn't sing it... it was like trying to make a "holy day" special but was my own effort. It was too much mental gymnastics to celebrate something that was in the past. We live in the Sabbath-rest today, we live in the fulfillment, we live in Jesus!

So as I realized that and prayed about it, new words came and I could worship Him in the fulfillment, in the life and light! I began to sing something like, "Shabbat shalom, Jesus, Messiah, You have brought us home." Much later He gave me better words for the song:

As I wrote the words into my private worship songbook, I wondered and felt that maybe there was a picture He would show me of this? I began to see something like a Jewish family in their home. They're lighting the Sabbath candles. But they see the light in a new light. They see that Jesus is the light of the world, that He is the light that never goes out.

I saw a picture of a little Jewish boy in a yarmulke; he is looking with joy and wide child's eyes at the nail print in Jesus' hand, and the boy's hand is touching and feeling His. He sees by the light of a nearby Sabbath candle. And the light of Christ is a brighter light. The Sabbath candle's light was a shadow of the real Light, Jesus the Messiah. The "rest" has now come. The Shabbat is here, the Moshiach is here. His name is Yeshua ha Moshiach, Jesus Christ our Savior, our Shabbat shalom forever.

Bless you in Him, in His peace today!

Comments:
I can rest in Him. He paid the price.

A logical analysis (found in www.netzarim.co.il (Netzarim.co.il is the website of the only legitimate Netzarim-group)) (including the logical implications of the research by Ben-Gurion Univ. Prof. of Linguistics Elisha Qimron of Dead Sea Scroll 4Q MMT) of all extant source documents of “the gospel of Matthew” and archeology proves that the historical Ribi Yehosuha ha-Mashiakh (the Messiah) from Nazareth and his talmidim (apprentice-students), called the Netzarim, taught and lived Torah all of their lives; and that Netzarim and Christianity were always antithetical.

It is important to distinguish between the historical Ribi Yehoshua and the le-havdil Christian Jesus. No one can follow two masters, the two polar-opposites - the authentic, historical, PRO-Torah 1st-century Ribi Yehoshua from Nazareth and the 4th-century (post-135 C.E.), arch-antithesis ANTI-Torah apostasy developed by the Hellenists (namely the Sadducees and Roman pagans who conspired to kill Ribi Yәhoshua ha-Mashiakh (the Messiah), displaced his original followers Netzarim and redacted the NT).

The historical Ribi Yehoshua of Nazareth is not the same person as the Christian Jesus. And the only way to follow Ribi Yehoshua is by becoming one of his Netzarim-talmidim.

The Christian Jesus is described as teaching words in the “gospels” that contradicts Torah. Le-havdil,

Ribi Yehoshua didn’t teach against Torah, and is the only candidate of being the Mashiakh ben Yoseiph.

Hello Anders! Nice to "meet" you!

You've said a lot of information here, and I know you would really like to prove something with it. But bro, can I just make an observation?

Where is your *peace*, man?

I know you don't believe in Jesus as the New Testament records Him, yet the NT texts we have are more ancient than the Masoretic texts. People have tried to prove many various things from the Qumran texts -- I have heard countless theories. Ironically, one commonly followed motivation seems to be to find something to disprove Jesus.

So what I dare you to do is call upon Him and give Him a try. Seriously. Because I am not just talking theology here. Not at all. I am talking about someone who is *alive* and who I talk to daily, and who talks back to me and people I know. He is alive, and He has brought the promised new covenant that is founded on better promises than the Mosaic covenant of Sinai. He brings rest in Himself for us, and He Himself is our righteousness -- the Lord Our Righteousness!

May you be blessed in His name!

Thank you for visiting! Please leave a message if you were blessed or have any questions. Additionally, please sign your name! I would love to reply and explain everything. If you have disagreements or would like to discuss something, please leave contact information so I can email you. Unsigned comments may be deleted.

Be blessed in His heart today! His heart is for you!

If you'd like to use or copy images from this site, please contact me. Please do not use or copy any images without the artist's consent.
Copyright © 2005 by Ramone Romero.
All rights reserved.

Jesus' heArt in others